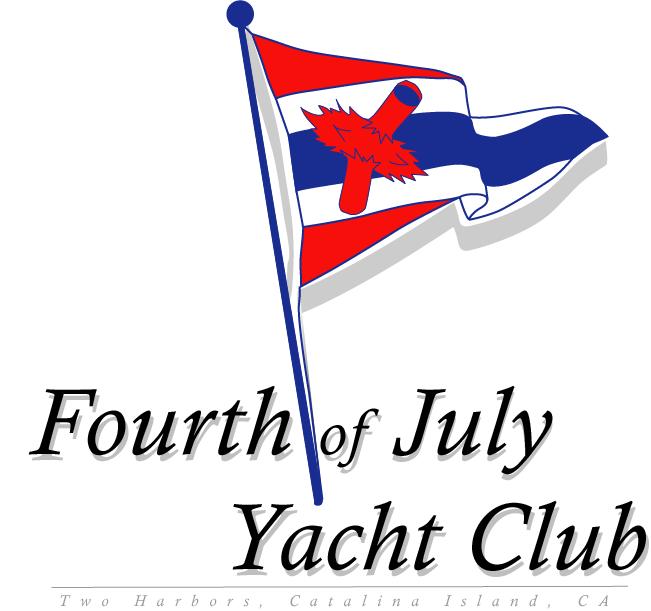 The History of Fourth of July Yacht Club

By the Honorable Robert Armstrong

The modern history of Catalina Island began in 1850 when Pio Pico, the last Mexican Governor of California, sold the Island for $100.00 to a friend as he was departing on horseback from the new State of California to refuge in Old Mexico.

The Island changed ownership several times before it was bought by the Banning Brothers in the nineteenth century. Phineas Banning was responsible for building the rail line from the present Union Station location to Wilmington, and had also established stage coach routes. The Bannings owned the Island in the 1800’s through the turn of the century and until it was eventually sold to Mr. Wrigley, the chewing gum magnate. During their ownership, the Bannings believed the most desirable part of the Island to be the West End. They built their home at a site where they had a commanding view of both the North and the South harbors. They terraced the hill on which their home was built and included nine bedrooms, so that they could accommodate guests from the mainland. They landscaped they area around their home and laid out roads sufficient for mules and wagons and horses and buggies. Behind the Banning house were stables and a coach house, with a variety of buggies and wagons.
The Bannings built the pier at Cat Harbor where coastal freighters could come in with lumber and supplies and mule drawn wagons could be loaded directly from the ship.

One 4th of July, the Banning family decided to picnic in the pleasant little cove just west of the Isthmus. It was a lovely picnic spot and such a nice day was had that it became a family tradition. Because of those outings, the Bannings named the cove “Fourth of July Cove.”

Many years later, the cove was a girl scout camp and one member was a camper here 60 years ago. (She was only 2 years old) The campers slept in tents, but bathrooms and showers were built which are now the men and women’s heads. Ever wonder how the pillbox got its name? It was the dispensary.

After the second World War, boaters were allowed to return to the Island, and moorings began to appear. Some enterprising souls acquired old railroad train wheels and dropped them in the water with a line to an upside down water heater. Some of the “owned” moorings in the cove are still in those locations.

In the late fifties, the Island Company entered into an arrangement to lease the cove to members of the Long Beach Yacht Club. The cost per member who elected to join the cove was $75 per year. However, since there were not enough members of the Long Beach Yacht Club interested in having the exclusive use of the cove, it was opened up to the boating public. For the next few years, Doug Bombard was our landlord; collected the dues and furnished everything from toilet paper to soft drinks to the club.
ODs had fairly simple parties. Some parties had hors d’oeuvres of cubed cheese, braunsweiger and crackers. The dinner line furnished the salad and dressing, baked potatoes and bread, and the biggest job of the OD were to clean up after dinner and join the party. And we did party in those days. On our old record player, we had the song “Three O’Clock in The Morning” and I can remember lots of parties where we played it at three o’clock in the morning. At that time, we had less than a hundred families.

Some of the parties became quite elaborate. Not only the committee members but the guests as well came in costume as Romans, Mexicans, Hawaiians, shipwreck survivors and pirates. One memorable party was a “Come in What You Wore in 1944.” A lot of us squeezed into our old World War Two uniforms.
One of our members owned an airline on the East Coast that flew in lobsters from the Caribbean to Florida. When they hosted a party, they flew hundreds of pounds of lobster and shrimp to Los Angeles and brought them to the party. Eleanor and I had the chore of being the ODs for the following week! Try to top that one.
For a while, the parties were “can you top this,” and there were a lot of steaks that were quietly returned to boats and the committee didn’t have much business in the dinner line. In those days, the OD chairman were reimbursed at the rate of $15.00 per party.

In the mid-seventies, we incorporated ourselves into a Non-Profit Corporation named Fourth of July Yacht Club, and took over the operation of the cove. Those pledgers never had to put up the $1,000 – but for stepping forward, they became the “Charter Members” of the new club and are listed in the roster every year. Sixteen of the original sixty-nine Charter Members are still members in 1995.

Several years ago, a couple of members decided to preserve for posterity the recipes for the marvelous hors d’oeuvres that had been prepared over the years by the various ODs. The result of their labors was the first Fourth of July Yacht Club Cookbook, which they assembled and printed at their own expense.
For years, we have been the star in the crown of the west end of the Island. Without help from the landlord, we have put a new roof on the club house, built additional cabins, doubled the size of the porch and contributed tens of thousands of man hours and hundreds of thousands of dollars to keep the cove in good shape.
Practically all the utensils in the galley came from the kitchens of members. One donated the ice machines and the other donated the sign boards that state the rules for the use of the galley. For years, members saw a need in the cove and quietly arranged to fill it. We have worked to keep the cove what it is, because we realize what we have. Our club and our location are unique. Those among us who have traveled all over the world come back to Fourth of July Cove and proclaim that there is nothing like it in the whole world.